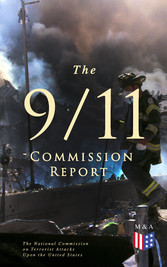 The 9/11 Commission Report - Full and Complete Account of the Circumstances Surrounding the September 11, 2001 Terrorist Attacks

The 9/11 Commission Report - Full and Complete Account of the Circumstances Surrounding the September 11, 2001 Terrorist Attacks

It is perhaps obvious to state that terrorists cannot plan and carry out attacks in the United States if they are unable to enter the country. Yet prior to September 11, while there were efforts to enhance border security, no agency of the U.S. government thought of border security as a tool in the counterterrorism arsenal. Indeed, even after 19 hijackers demonstrated the relative ease of obtaining a U.S. visa and gaining admission into the United States, border security still is not considered a cornerstone of national security policy. We believe, for reasons we discuss in the following pages, that it must be made one. Contents: A Factual Overview of the September 11 Border Story The September 11 Travel Operation - a Chronology Terrorist Entry and Embedding Tactics, 1993-2001 The Redbook Terrorist Travel Tactics by Plot Al Qaeda's Organizational Structure for Travel and Travel Tactics Immigration and Border Security Evolve, 1993 to 2001 The Intelligence Community The State Department The Immigration and Naturalization Service Planning and Executing Entry for the 9/11 Plot The State Department The Immigration and Naturalization Service Finding a Fair Verdict Crisis Management and Response Post-September 11 The Intelligence Community The Department of State The Department of Justice Response at the Borders, 9/11-9/20, 2001 The Department of Homeland Security