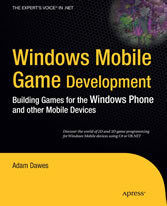 This book will provide you with a comprehensive guide to developing games for both the Windows Mobile platform and the Windows Phone using the industry standard programming languages C# and VB .NET.
You will be walked through every aspect of developing for the Windows Mobile platform-from setting up your development environment for the first time to creating advanced 3D graphics. Finally, you'll learn how you can make your applications available to others, whether distributing for free or selling online.
Using extensive code samples throughout, you'll gather all the information needed to create your own games and distribute them successfully for others to enjoy.
Aimed primarily at C# developers, almost everything in the book can be used in VB .NET too. For those areas where this is not the case, workarounds are suggested so that VB .NET developers are still able to use the techniques described.


Adam Dawes is a software developer and systems architect working at a cutting-edge online service development company. He has been a compulsive programmer since the age of 4, when he was first introduced to a monochrome Commodore PET. The love affair has continued through three subsequent decades, flourishing through the days of the 8-bit dinosaurs to today's era of multi-core processors and pocket supercomputers. A constant throughout all of this has been Adam's fondness of computer games. From the very first time Nightmare Park displayed its devious maze of pathways in green symbols back in 1980, he has been a games player across a variety of genres and styles. These days he spends his spare time playing the latest 3D titles on his PC, or enjoying some of the classics in his stand-up arcade machine or sit-in cockpit driving cabinet. Creating his own games has always been a hobby and while he has no intention of becoming part of the professional games industry, he has a lot of fun developing his own titles nonetheless. Adam lives with his wife, Ritu, and son, Kieran, in the southeast of England. His web site is at www.adamdawes.com.