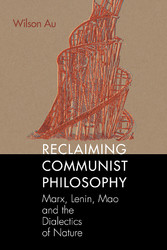 This book is unique in its utilization of the natural sciences to explain and illustrate key concepts of communist philosophy. In its recapitulation of the spirit of Engels’s unfinished manuscript, The Dialectics of Nature, it relies on the physical sciences developed since Engels’s time to reaffirm the validity of materialist dialectics, a point which is more easily made in the context of natural phenomena than it is in social phenomena. The basic philosophical tenets underlying Communist ideology are all supported by the natural sciences.

The book is situated within the Marxist-Leninist-Maoist tradition. Its overarching theme is the need to reclaim our most fundamental weapon of that tradition—it’s methodology or philosophy—which has been vitiated or even scrapped by well-intentioned revolutionaries throughout the 20th century. In particular, some of Mao’s philosophical formulations are found to be erroneous and in opposition to his practice. With the rapidly accelerating deterioration of the global capitalist order in progress since 2007, the urgency of this reclamation cannot be over-emphasized.