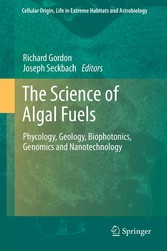 This volume, The Science of Algal Fuels (volume 25 of COLE), contains 26 chapters dealing with biofuels contributed by experts from numerous countries and covers several aspects of algal products, one being 'oilgae from algae,' mainly oils and fuels for engines. Among the prominent algal groups that participate in this process are the diatoms and green algae (Chlorophyceae). Their metabolism and breeding play an important role in biomass and extraction of crude oil and algal fuel. There is a strong relation between solar energy influencing algal culture and the photobiology of lipid metabolism. Currently, many international meetings and conferences on biofuel are taking place in many countries, and several new books and proceedings of conferences have appeared on this topic. All this indicates that this field is 'hot' and in the forefront of applied bioscience.