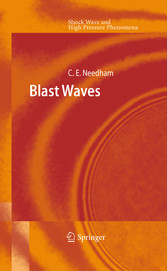 As an editor of the international scienti?c journal Shock Waves, I was asked whether I might document some of my experience and knowledge in the ?eld of blast waves. I began an outline for a book on the basis of a short course that I had been teaching for several years. I added to the outline, ?lling in details and including recent devel- ments, especially in the subjects of height of burst curves and nonideal explosives. At a recent meeting of the International Symposium on the Interaction of Shock Waves, I was asked to write the book I had said I was working on. As a senior advisor to a group working on computational ?uid dynamics, I found that I was repeating many useful rules and conservation laws as new people came into the group. The transfer of knowledge was hit and miss as questions arose during the normal work day. Although I had developed a short course on blast waves, it was not practical to teach the full course every time a new member was added to the group. This was suf?cient incentive for me to undertake the writing of this book. I cut my work schedule to part time for two years while writing the book. This allowed me to remain heavily involved in ongoing and leading edge work in hydrodynamics while documenting this somewhat historical perspective on blast waves.