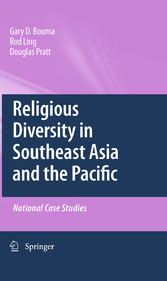 
Gary D Bouma is Emeritus Professor of Sociology and UNESCO Chair in Interreligious and Intercultural Relations - Asia Pacific at Monash University in Victoria, Australia, and Chair of Board of Directors for The Parliament of the World's Religions 2009. He is Associate Priest in the Anglican Parish of St John's East Malvern, Melbourne.

Rod Ling is a Research Assistant in the Institute for Social Change, University of Manchester and was until recently UNESCO Postdoctoral Fellow in the School of Political and Social Inquiry, Monash University.

Douglas Pratt is Associate Professor in the Department of Philosophy and Religious Studies at the University of Waikato, New Zealand. He is also the New Zealand Associate of the UNESCO Chair in Intercultural and Interreligious Relations - Asia Pacific and an Adjunct Senior Research Fellow of the School of Political and Social Inquiry, Monash University.