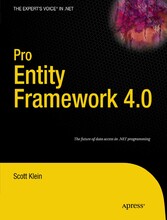 The introduction of SQL Server 2005 began the process which has seen .NET become an integral part of the SQL Server database technology. SQL Server 2008 is the next evolutionary step in that story. Alongside the more traditional database enhancements in the new release, there is an increasing focus upon a greater and more challenging integration with .NET 3.5. This book shows how to take advantage of this tight integration and how developers and DBAs can manipulate data more easily than ever before.


Scott Klein is a Microsoft SQL Server 'Most Valuable Professional' and independent consultant specializing in SQL Server performance and business intelligence. Scott is the author of several books, including Professional SQL Server 2005 XML, Professional LINQ, and Pro ADO.NET 4.0 Entity Framework. He was a contributing author to Pro SQL Server 2008 Relational Database Design and Implementation, as well as to the Microsoft SQL Server 2008 Bible. Scott has written many articles for the SQL Server Standard magazine. He holds the MCDBA, MCSD, and MCSE certifications. He is heavily involved in the south Florida community, running two SQL Server user groups and the South Florida SQL Saturday events. Scott also speaks frequently at user groups across south Florida. Scott has nearly 20 years working with SQL Server and consulting in small to enterprise-size environments.