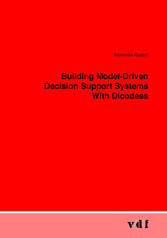 Many decisions in domains such as production, finance, logistics, planning, and economics, can be supported by optimization models. However, decision makers are often intimidated by the mathematical formalism of the corresponding model management tools and tend to keep their distance from them. Moreover, when these optimization models are encapsulated into user-friendly systems, this often leads to ad hoc software difficult to extend and to maintain. Finally, most of the existing applications poorly support the cooperative nature of decisions involving several actors.

This book describes the theoretical foundations and the architectural details of the open source system named Dicodess, which precisely tries to solve these problems by implementing a new vision for distributed decision support systems. First, systems based on Dicodess hide the optimization models and their dry formalism behind a generic, reusable user friendly user interface. Decision makers can then perform complex what-if analysis without writing a single line of model code. Then, systems based on Dicodess rely on an innovative distributed architecture allowing several actors to dynamically get together in autonomous network groupings called federations, on a LAN or WLAN, to solve problems without being hampered by technical issues.

This book is for anyone interested in learning and effectively and successfully applying model-driven decision support systems, including professors and students in DSS, Operations Research, Management Information Systems, and Operations Management, researchers active in the DSS community, and practitioners involved in the development of DSS.