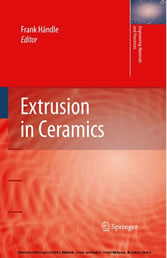 Frank Handle ¨ 1.1 What to Expect For some time now, I have been toying around with the idea of writing a book about 'Ceramic Extrusion', because to my amazement I have been unable to locate a single existing, comprehensive rundown on the subject - much in contrast to, say, plastic extrusion and despite the fact that there are some outstanding contributions to be found about certain, individual topics, such as those in textbooks by Reed [1], Krause [2], Bender/Handle ¨ [3] et al. By way of analogy to Woody Allen's wonderfully ironic movie entitled 'Eve- thing You Always Wanted to Know about Sex', I originally intended to call this book 'Everything You Always Wanted to Know about Ceramic Extrusion', but - ter giving it some extra thought, I eventually decided on a somewhat soberer title. Nevertheless, my companion writers and I have done our best - considering our target group and their motives - not to revert to the kind of jargon that people use when they think the less understandable it sounds, the more scienti c it appears. This book addresses all those who are looking for a lot or a little general or selective information about ceramic extrusion and its sundry aspects. We realize that most of our readers will not be perusing this book just for fun or out of intellectual curiosity, but because they hope to get some use out of it for their own endeavours.