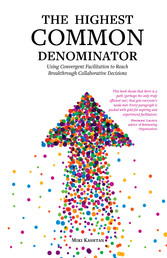 What if people -- even longtime enemies -- could transform conflicts into creative dilemmas they feel motivated to solve together? What if employees could leave a meeting empowered and with a joint sense of purpose? In 'THE HIGHEST COMMON DENOMINATOR: Using Convergent Facilitation to Reach Breakthrough Collaborative Decisions,' Miki Kashtan introduces a novel decision-making process called Convergent Facilitation that builds trust from the beginning, surfaces concerns and addresses them, and turns conflicts into creative dilemmas that groups feel energized to solve together. This highly effective process has been used successfully around the world to resolve problems and teach people how to collaborate without sacrificing productivity. Since 2002, Convergent Facilitation has helped organizations, businesses, and governments upend traditional and unproductive decision-making methods, such as majority rule, top-down decision-making, or consensus, which can drain a group's energy. In 2012, Miki worked with the Minnesota State Legislature to resolve gridlock on child custody legislation and helped stakeholders draft bills that passed nearly unanimously. In a 2014 op-ed in the New York Times, Miki explained how power differences lead employees to stay silent and not feel part of a common goal, which ultimately makes a business run less effectively. THE HIGHEST COMMON DENOMINATOR moves through three phases of a process that brings groups to outcomes that are profoundly collaborative and genuinely supported by all. Through vivid case studies and practical examples, the book explains: · how to guide people towards solutions that integrate everyone's needs and concerns without requiring compromise; · how to keep people on track with the task at hand; · how to invite dissent and engage with it productively; and · how to attend to the power differences that so often interfere with collaboration.