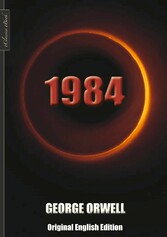 London, in the year 1984: The world is divided into three constantly warring superstates Oceania, Eurasia and Eastasia. In Oceania, of which Britain is a part, the Partys power is absolute. Every action, word, gesture and thought is monitored under the watchful eye of Big Brother and the Thought Police. In the Ministry of Truth, the Partys Propaganda Department, Winston Smiths job is to edit and rewrite history, to meet the needs of the government. With every lie he writes, Winston grows to hate the Party that persecutes those who dare to commit thoughtcrimes. As Winston falls in love with Julia, they begin to question the system, and expose themselfes to immense danger ... | Since its first publication in 1949, George Orwells haunting prophecy has been the definitive dystopian novel and one of the most influential works of the 20th century.

George Orwell (1903-50) was born in Bengal and educated in Eton. After serving in the Indian Imperial Police in Burma, he returned to Europe to make a living writing novels and essays. He was essentially a political writer, a man of intense emotion and a desire for justice. As an opponent of totalitarianism, he wrote essays, political satires such as Animal Farm and his incomparable clairvoyant dystopia 1984.