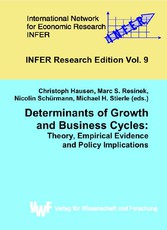 "Economic growth and business cycles are two distinct, but closely related issues. Economic growth is one of the most demanding challenges for policy makers and economists all over the world. In industrial countries, significant demographic changes in the decades ahead will have a major impact. At the same time, the degree of interdependency between economic regions is increasing, posing a challenge for industrial as well as developing countries. Business cycles as a topic for economic research sometimes follow a cyclical pattern themselves. Especially after long and strong boom periods the business cycle is often said to be obsolete, replaced by a new kind of pattern, a ‘new’ economy or the like. The empirical problem for analysts of both growth and business cycles is that new developments are difficult to monitor in real time. Cyclical, structural and other patterns are overlapping, making it difficult to assess the nature of observations.

The INFER Annual Conference 2003 on “Determinants of Growth and Business Cycles: Theory, Empirical Evidence and Policy Implications” which was held in September 2003 in Giessen, Germany, gave room for theoretical papers, empirical results and case studies, including vigorous policy statements as well as elaborate modelling with a focus on practical relevance. Most of the presented papers and one of the introductory lectures are included in this volume. Papers were presented in three sessions: Session I focused on the “Determinants of Growth”. Session II was on “Business Cycles: Theory and Empirical Evidence”. Session III covered “Convergence and Economic Development”. Contributors to this volume come from two continents and eight countries, working in research institutes, universities, central banks and international organisations."