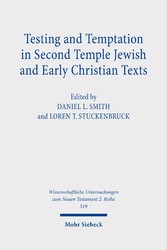 From the Wisdom of Ben Sira to the writings of Paul, many Second Temple Jewish and early Christian texts recognize the inescapable role of testing and temptation in human experience. Though God is often presented as one who tests, testing is also attributed to Satan, Mastema, the people of God, and individual humans. How did ancient interpreters react to texts that depict the God of Israel as testing, tested, or intervening on behalf of those undergoing a test? What assumptions do authors have about the role of testing in human experience? How does the vocabulary used for testing and temptation influence the meaning of the text? The essays in the present volume constitute an opening foray into addressing these questions, and this volume aims to catalyze further research into additional dimensions of testing and overlooked motifs in the relevant literature.