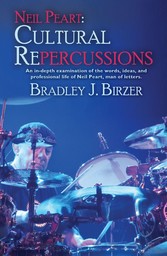 Though Neil Peart is universally acknowledged as one of the greatest living drummers, few studies have been devoted to his writings. Yet, Peart is very much a man of his words. He writes lyrics, travelogues, short stories, essays, and books of cultural criticism. In terms of his cultural impact, he is also one of North America's greatest living men of letters. The themes he offers in his writings are timeless: philosophy, journeys, growth, exploration, excellence, art, satisfaction, happiness, religion, politics, individualism, expression, natural history, cultural criticism, life, love, loss, redemption, and beauty.
Peart wants every person to persevere through individual trials, and find his or her unique gifts and abilities and, ultimately, true happiness. Most tellingly, Peart does not just profess such things, he has lived them and continues to live them.
Never satisfied with second best or any form of defeat, Peart challenges himself time and time again to live up to his own philosophy. And he has succeeded through great personal adversity and, at times, irrational professional jealousy of and hatred toward him, and he has always succeeded through grace.
This book carefully examines the influence his life, his witness, and his words have had on others. Neil Peart has lived life to the fullest, and he has made us each better for it.
When his fate becomes woven with that of Tabat's most famous gladiator, Bella Kanto, his existence becomes even more imperiled. Kanto's magical battle determines the weather each year, and the wealthy merchants are tired of the long winters she's brought. Can Teo and Bella save each other from the plots that are closing in on them from all sides?