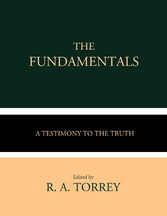 In 1909 God moved two Christian laymen to set aside a large sum of money for issuing twelve volumes that would set forth the fundamentals of the Christian faith, and which were to be sent free to ministers of the gospel, missionaries, Sunday School superintendents, and others engaged in aggressive Christian work throughout the English speaking world. A committee of men who were known to be sound in the faith was chosen to have the oversight of the publication of these volumes. Rev. Dr. A. C. Dixon was the first Executive Secretary of the Committee, and upon his departure for England Rev. Dr. Louis Meyer was appointed to take his place. Upon the death of Dr. Meyer the work of the Executive Secretary devolved upon me. We were able to bring out these twelve volumes according to the original plan. Some of the volumes were sent to 300,000 ministers and missionaries and other workers in different parts of the world. On the completion of the twelve volumes as originally planned the work was continued through The King's Business, published at 536 South Hope St., Los Angeles, California. Although a larger number of volumes were issued than there were names on our mailing list, at last the stock became exhausted, but appeals for them kept coming in from different parts of the world. As the fund was no longer available for this purpose, the Bible Institute of Los Angeles, to whom the plates were turned over when the Committee closed its work, have decided to bring out the various articles that appeared in The Fundamentals in four volumes at the cheapest price possible. All the articles that appeared in The Fundamentals, with the exception of a very few that did not seem to be in exact keeping with the original purpose of The Fundamentals, will be published in this series.