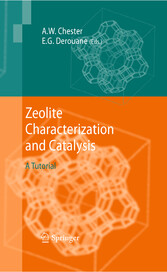 Zeolite Characterization and Catalysis - A Tutorial

Zeolite Characterization and Catalysis - A Tutorial

The idea for putting together a tutorial on zeolites came originally from my co-editor, Eric Derouane, about 5 years ago. I ?rst met Eric in the mid-1980s when he spent 2 years working for Mobil R&D at our then Corporate lab at Princeton, NJ. He was on the senior technical staff with projects in the synthesis and characterization of new materials. At that time, I managed a group at our Paulsboro lab that was responsible for catalyst characterization in support of our catalyst and process development efforts, and also had a substantial group working on new material synthesis. Hence, our interests overlapped considerably and we met regularly. After Eric moved back to Namur (initially), we maintained contact, and in the 1990s, we met a number of times in Europe on projects of joint interest. It was after I retired from ExxonMobil in 2002 that we began to discuss the tutorial concept seriously. Eric had (semi-)retired and lived on the Algarve, the southern coast of Portugal. In January 2003, my wife and I spent 3 weeks outside of Lagos, and I worked parts of most days with Eric on the proposed content of the book. We decided on a comprehensive approach that ultimately amounted to some 20+ chapters covering all of zeolite chemistry and catalysis and gave it the title Zeolite Chemistry and Catalysis: An integrated Approach and Tutorial.

The Authors are eminent and highly respected in the field of zeolites and molecular sieves. Dr. Derouane has an international reputation for excellence in research of zeolites. Dr. Chester has over 60 US patents in the area and has practised all aspects of zeolite science industrially for at least 30 years.