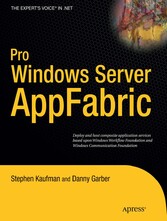 
Stephen Kaufman is an architect with Microsoft Consulting Services focusing on middle tier technologies, and has worked with BizTalk since the original BizTalk CTP in 1999. In addition, he is an author, trainer and speaker. He has written Microsoft Knowledge Base articles, a BizTalk tools whitepaper, as well as a number of other articles. He was a contributing author for the BizTalk Certification Exam 74-135. He maintains a blog focused on integration technologies at http://blogs.msdn.com/skaufman. Stephen has also spoken internationally at events such as Tech-Ed North America, TechEd EMEA, Microsoft's SOA & BPM Conference, Microsoft's Developer Days as well as a number of other conferences and events.