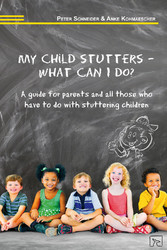 My child stutters - what can I do? - A guide for parents and all those who have to do with stuttering children

My child stutters - what can I do? - A guide for parents and all those who have to do with stuttering children

Will my child outgrow stuttering?

About 5 out of 100 children definitely stutter. Four of these five children will recover during childhood, leaving about 1 % of stuttering adults (by comparison, asthma affects 10 % of children and 5 % of adults). The longer children continue to stutter, the less likely they are to recover. After puberty, recovery is rare. Unfortunately, we cannot predict who will recover from stuttering and who will not. As far as we currently know from research, the severity of stuttering at the beginning of the disorder is irrelevant to the prognosis. Generally, treatment focuses on different factors that enhance the chances of recovery, but therapists cannot influence recovery itself. Hence, a serious stuttering therapist will not promise recovery from stuttering but prepare parents for the possibility of chronic stuttering.

Typically, stuttering develops during childhood, often when children switch from single words to noun-plus-verb constructions (“daddy working”) around 2 years. The onset of stuttering can be sudden, from one moment to the next, or gradual with no exact starting point. Often, the degree of stuttering over time varies. Periods with few or any symptoms alternate with periods of frequent stuttering. In addition, stuttering can be pronounced in certain situations or with certain people, while the child speaks fluently in other situations and with other people. This variability concerning time, situation and people is a typical phenomenon of stuttering.

For example, 4-year old James stutters a great deal and with extreme muscle tension when his dad returns from work in the evening. He becomes excited and wants to show and explain what he has experienced during the day. Verbalizing these experiences while being extremely excited overstrains his speech control and results in stuttering. In contrast, James talks fluently to himself while playing alone with his cars.

James has stuttered since he was three years old. Back then, he had just started to combine two or three words when his stuttering came out of the blue. At first, he seemed just surprised that he couldn’t get the words out of his mouth, but after a while he became angry and did not want to talk for the rest of the day. This lasted three weeks during which his parents became more and more upset. Then the symptoms lessened. Since then, James has had days or even weeks with very little stuttering, but he has never been completely fluent. Meanwhile, his parents have noticed that times of excitement like his birthday or Christmas reinforce his stuttering.

What can we do if it is stuttering?

A mother of a 19-year-old son who recovered from stuttering: At first, we were shocked; the stuttering appeared suddenly and massively when our son was 7 years old. Within a few days, he could hardly speak at all. Luckily, we found a caring and competent speech therapist who treated stuttering children early on.

46-year-old stuttering physicist: If my child stuttered, I would seek professional help and advice immediately. Not necessarily to start a therapy, but to be on the safe side if the stutter doesn’t go away on its own. The therapist should be an expert on stuttering, with a lot of experience in the treatment of stuttering children.

Parents who notice stuttering symptoms in their child for the first time are in most cases unsettled. They start to listen more closely to their child’s speech to check their suspicion. Many parents feel insecure, helpless and worried, especially if their child starts to stutter with severe symptoms. Often, they do not know how to react if their child stutters. Family and friends provide conflicting explanations concerning the possible course of the disorder and advice on how to deal with the stuttering child. In addition, parents feel their child’s anguish whenever he or she gets stuck and some of them feel guilty.

Parents are very competent in the recognition of stuttering-like dysfluencies. Therapists and doctors should take very seriously parents’ suspicion that their child stutters. Their worry is absolutely justified. When parents try to help their child deal with his or her speech difficulties, they have acknowledged that an assessment and treatment might be necessary. Professionally, it makes sense to start a thorough assessment and treatment if indicated. Some children show very occasionally mild stuttering symptoms that do not seem to bother them. Parents of these children tend to decide that they do not have to take immediate action. They are not worried because they feel they can handle the symptoms. There are probably also parents who don’t even recognize these mild symptoms as stuttering and do not react at all.

If you notice such mild stuttering symptoms in your child, it might make sense 1) to obtain information on when treatment is necessary by contacting a paediatrician or a speech-and-language therapist directly (see chapter Finding a therapist) and 2) to trust your intuition. If you feel uncertain about how to deal with your child’s dysfluency, you may want to talk to a speech-and-language therapist who has experience of working with children who stutter.