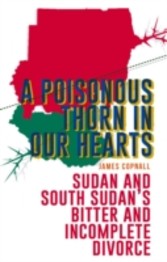 What happened after Africa's biggest country split in two? When South Sudan ran up its flag in July 2011, two new nations came into being. In South Sudan a former rebel movement faces colossal challenges in building a new country. At independence it was one of the least developed places on earth, after decades of conflict and neglect. The '",rump state'",, Sudan, has been debilitated by devastating civil wars, including in Darfur, and lost a significant part of its territory, and most of its oil wealth, after the divorce from the South. In the years after separation, the two Sudans dealt with crippling economic challenges, struggled with new and old rebellions, and fought each other along their disputed border. Benefiting from unsurpassed access to the politicians, rebels, thinkers and events that are shaping the Sudans, Copnall draws a compelling portrait of two misunderstood countries. A Poisonous Thorn in Our Hearts argues that Sudan and South Sudan remain deeply interdependent, despite their separation. It also diagnoses the political failings that threaten the future of both countries. The author puts the turmoil of the years after separation into a broader context, reflecting the voices, hopes and experiences of Sudanese and South Sudanese from all walks of life.